I’ve just bought a new webcam, and wanted to test the snapshot utility, so I decided to take a photo of the entry paella in the prestigious French dictionary Le Petit Robert. The reason I have taken a photo of it is because the etymology given is wrong: 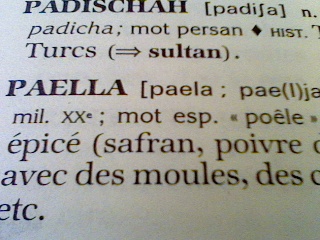 According to this dictionary, the word is Spanish and means poele, that is, pan. The word may well have entered French via Spanish, but it certainly doesn’t mean pan in Spanish, in which the word is sartén, although the word paellera has also been adopted to refer to the dish used to cook paella.

The word is originally from Catalan. In the Valencia region, they began cooking rice in shallow pans, referred to in Catalan as a paella. So the dish would have been referred to as arròs a la paella, that is, rice cooked in a shallow pan. Over time, this was shortened simply to paella, and the word was adopted by other languages. In Catalan, you still hear paella referred to simply as arròs (rice) when it is not necessary to specify which rice dish one is referring to.

This correct etymology is given in various other dictionaries, including the Merriam Webster.

In Catalonia, paella is traditionally eaten on a Thursday. I have no idea why, and would love to hear an explanation. I’m also not sure whether this tradition is just in Catalonia or whether it is also followed in the Valencia region and the Balearic Islands, or indeed in other regions of Spain. A former Galician flatmate of mine was unaware of this tradition before moving to Catalonia, so I am assuming it is not a tradition followed throughout Spain.

3 thoughts on “Etymology of paella”